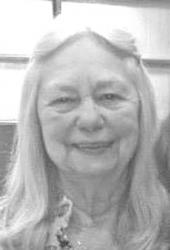 LaVaughn Faye Ledford, 81, passed away early Thursday, May 7, 2020 at the Select Specialty Hospital in Kansas City, Kansas after battling cancer the past several months.

LaVaughn was joined in marriage to Amos N. Yowell in September 9, 1956. They made their home in Council Grove and began a family. During this time LaVaughn began working at I.B.P. in Emporia. Amos and LaVaughn would later divorce after over twenty years of marriage. The two would stay in contact until Amos preceded her in death on June 6, 1983.

LaVaughn continued living in Council Grove where she met David Ledford. They would marry on October 12, 1978 in Emporia. David and LaVaughn made their home in Hamilton, Kansas where they worked side by side farming and ranching northeast of town. In 1985 they moved to Cassville, Missouri and started D&L Trucking. They worked together until David’s death on August 5, 2009. She continued operating the trucking company until 2010.

In October of 2016, LaVaughn returned to Council Grove and remained there the rest of her life. LaVaughn relished in the opportunity to be nearer her children, grandchildren and great-grandchild-ren. Following her return to Kansas she began attending the Community Christian Church in Council Grove.

LaVaughn will live on in the hearts and memories of her sons, Gary Yowell of Topeka, Rodney Yowell of Council Grove and Brian Yowell of Emporia; step daughters, Rhonda Lynn Finnerty of Emporia and Rita Rae Bluma of Emporia; step sons, William Clay Ledford of Emporia and David Michael Ledford of Monett, Missouri; twenty grandchildren and twenty eight great-grandchildren; numerous extended family and a host of friends. She was also preceded in death by a son, Steven Yowell Ledford; a step daughter, Cherri Lopez and two brothers, Fred White and Larry White.

Services will be held at 1:00 P.M. Saturday, May 16, 2020 at the VanArsdale Funeral Home in Madison. LaVaughn will lie in state from 11:30 A.M. until service time on Saturday at the funeral home. Burial will follow services at Janesville Cemetery in Hamilton. The family requests that memorial contributions be made to the Susan G. Komen For The Cure and sent in care of the VanArsdale Funeral Home, P.O. Box #488,Madison, Kansas 66860. Condolences may be expressed at vanarsdalefs. com. Please keep in mind that social distancing will need to be practiced at all times during the viewing and service.