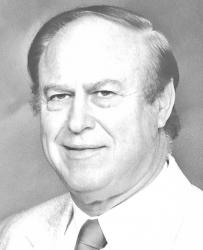 Richard Morrow Mosier, DDS, 90, lifelong resident of Herington, died Saturday evening, January 13, 2018, at the Herington Municipal Hospital. He was born on October 1, 1927, at the family home in Herington, the son of Dr. Harry David and Josephine Morrow (Johnson) Mosier.

Dr. Richard M. Mosier graduated from St John’s Catholic Grade School in 1941, and Herington High School with the class of 1945. He graduated from the University of Notre Dame with the class of 1950, which went undefeated in football throughout his time in college. While at Notre Dame, he played the saxophone in the Notre Dame Varsity Marching Band, and was an active member of the Aesculapian Club. He was a lifetime active member of the Notre Dame Alumni Band. During his first year at the University of Notre Dame, he was drafted into the U.S. Army and served under General MacArthur in the occupation forces of Japan at the International Military Tribunal for the Far East General Headquarters Supreme Commander of Allied Powers Armed Forces Pacific Area Command. Initially, he was a page during the International Military Tribunal, and later served as a personal aide to the 11 War Trial judges in Tokyo, Japan. He was awarded the World War II Victory Medal and the Army of Occupation Medal— Japan. He also received the Presidential Unit Citation. He qualified repeatedly as an Expert Rifleman. After completing college at the University of Notre Dame, he attended and graduated from Kansas City Dental College (currently UMKC School of Dentistry).

He began his dental practice in Herington with his father Dr. Harry D. Mosier in 1954. Dr Richard M. Mosier retired from dentistry on October 1, 2013, at the age of 86 after practicing for 59 years.

In the beginning of World War II, he received his private pilot’s license at age 16 and often flew with his parents. He was active as a Master Sergeant in the Civil Air Patrol at the Herington Army Air Force Base. He owned and flew a 1946 Ercoupe, and also a restored 1947 U.S. Air Force North American Navion. He was a member of the Aircraft Owners and Pilots Association and the Experimental Aircraft Association. He remained an active pilot well into his eighties.

He loved his family, caring for three generations of dental patients, telling stories, traveling, helping others, target shooting with expertise, scuba diving, flying, and pyrotechnics. He was an Honor Flight participant in Washington D.C. as a World War II veteran. On multiple occasions, he traveled to the jungles of Belize, Central America, providing volunteer dental care. He volunteered with his wife Norma for many years at the Kansas Sampler and was awarded the We Kan! Award, and also volunteered at the Kansas Symphony in the Flint Hills, and the American Dental Association’s annual meetings.

In lieu of flowers, memorials may be given to St. John’s Catholic Church, Herington, in care of the Zeiner Funeral Home, Herington Chapel, 404 S. Broadway, Herington, KS 67449-3038.

For more information or to leave a special message for the family online, visit www.zeinerfuneralhomes.com.